Go over to Brooklyn Met Fan if you don’t already (what the hell is wrong with you?!) and vote for “The Hottest Met 2009.” I voted Murphy, even though it’s probably David Wright. Santana at #3, bringing up the rear. GET IT?

Did you guys know I’m a terrible blogger? Whoops now you know! It has been a while, and the following shit has happened:

a) everybody got hurt
b) you mean I have to cheer for that smirky French bastard now? Godspeed, Churchy.
c) who the fuck is Angel Berroa?
d) Daniel Murphy turned into a legit first baseman, too bad his bat can’t catch up to his defense (uhhhhh did you think we’d say that back in April?)
e) I would like to propose a television show called The Days of Our Mets or As The Mets Turn or something, is Susan Lucci available?

But hey, the Mets have won four in a row now, only 5.5 back in the Wild Card, sure ok. If Beltran and Reyes and Delgado come back before the season is over I will do five cartwheels in a row, you have my word.

The real reason for this post however is this:

Tuesday, during a Citi Field press conference, Mets players Daniel Murphy, Bobby Parnell, J.J. Putz, Omir Santos and Gary Sheffield unveiled The Players Choice Signature Series featuring jerseys, T-shirts and caps they designed exclusively for their fans, with each product expressing the personalities and attitudes of the individual players who designed them.

Oh FUN, let’s have a looksee at these fashions by athletes, because that is always a good idea!

Design By: John Maine
What It Expresses: I think I’m really edgy and cool but in reality I’m a huge fucking dork 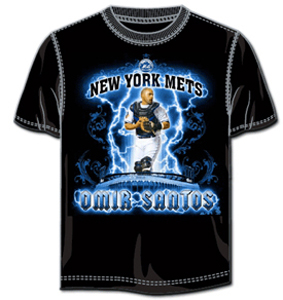 Design By: Omir Santos
What It Expresses: You hit one game-winning homer off Jonathan Papelbon and it makes you think you’re Perkunas.

Design By: Bobby Parnell
What It Expresses: I have no imagination, how about an ax for no good reason? Cool. 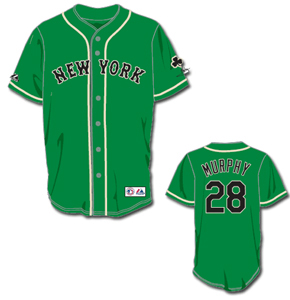 Design By: Daniel Murphy
What It Expresses: I have no discernible personality, but I AM Irish, so…wooooo Dropkick Murphys pint o’Guinness Shane MacGowan potatoes!

Design By: Gary Sheffield
What It Expresses: I am probably on drugs, and now so are you.

Design By: J.J. Put
What It Expresses: I enjoy the oeuvre of Toby Keith.

And finally, Smear The Queer is proud to offer the limited edition design by David Wright: 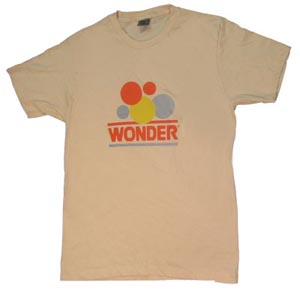 Observations:
1. The Amanda Bynes/LOTR answers = HOLY FUCK, I forget how young he is.
2. What a cocky sonuvabitch.
3. He clearly comes from the Andre Bazin school of film criticism.
4. I need to make him a mixtape.

Hate to say goodbye to Endy Chavez and Joe Smith (you all know how much I love Joe Smith), as well as Mike Carp (we hardly knew ye), but that sting is taken out with the subtraction of Aaron Heilman and the addition of JJ Putz. I can’t say I’ll miss Heilman and his kicked-puppy look on the mound, but I wish him well and hope he gets that starting job he’s been longing for.

As for Endy, well…he’s a legend because of The Catch, and even if he doesn’t have much else in his portfolio I will always love the guy for that memory.

And Joe! 😦 Joe, one of my baseball boyfriends. That won’t change even if he’ll be in Cleveland, but long-distance relationships never work. Still, my love will never die. Joe Smith, the only guy I wanted to see coming out of the bullpen during the last few months of the season, and the only reliever I wanted the Mets to hold onto. He’s got great stuff and he’s only going to get better, and we’re going to miss his arm. I will also miss his smile and will listen to Laura Nyro’s incredible “Goodbye Joe” in tribute.

baseball, blatant faggotry, joe smith is learning how to park |

This team can be totally adorable sometimes. Especially after a three-game sweep over the vaunted Milwaukee Brewers (again…not convinced). This is a nice surprise after what I felt on Monday, as the LACKLUSTER NO HEART COMPLACENT PUSSY Mets charged into Milwaukee and I found out the GRITTY FULL OF HEART NEVER SAY DIE COCKSURE Phillies were playing the Nationals. “GREAT,” I groaned. “Enjoy your division lead, Philly.” Little did I know that prior to that series, the Nats had won six in a row! And that they’d win the series against Philly. The Mets are now up three games with an absolutely crucial three-game set this weekend against Philly at Shea.

I find it hilarious that the Phillies are so intent on skipping Kyle Kendrick’s start in favor of Cole Hamels on Sunday. It makes sense, surely, but I can’t even remember the last time Hamels actually scored a win over the Mets (I know he’s started games the Phillies won, but that was mainly the bullpen blowing leads, no?). The Mets seem to hit him well. So OOOOH I’M SO SCARED. Bring it. And then there’s this:

“I understood the situation. I think this is the time that really matters. I know [pitching every] five days is what I just did five days ago. That’s what I’ve been able to do all year, and that’s what I’ll do this time. The main guy, when it’s the playoffs or the division championship or the big division rivalry, that’s what I want to be. It’s time to step up to the plate, and I know that I’m ready for it.”

WOW, pitching on only four days’ rest? My, Cole Hamels, you are quite the studly man, with your puppy-dog eyes and Jennifer Aniston hair. Shut up.

In some “OMG the bullpen has been so good lately!” news, this blog’s Baseball Boyfriend #2 Joe Smith has currently seen himself usurped by the emergence of one Jesus Daniel Murphy (who may have also usurped BB#1 David Wright! oh no!), but looking at his data I was surprised and happy to see that he hasn’t allowed a run since August 11th, and since that time he’s only allowed three hits. That’s pretty studly. So Joe, I give you some well-deserved love. And keep it coming, because Daniel Murphy has decided he likes being my one true guy. Competition is good!

To get away from the Mets for a moment (I’ll say this: good win last night, the maturation of Pelfrey is a beautiful thing to behold, only 3.5 back from the struggling Phillies, three series wins in a row…we Mets fans should welcome Jerry and the boys with much love tonight at Shea. Turn the page, etc. This feels like a new team, if only because that dour cloud known as Willie Randolph is gone. Also? I LOVE that now the starting pitchers stay on the mound to give the ball to the reliever. Shows solidarity), Wimbledon starts today!

To those of you who read this blog and skip the very infrequent tennis posts, let me say that baseball and tennis have been the two sports I’ve followed as close to religiously as possible my entire life. There was basketball until I couldn’t stand to watch my hometown Lakers (way to get blownout by BOSTON OF ALL TEAMS, OH MAH GAWD I LOST SO MANY BETS TO MASSHOLES THIS YEAR) in the mid-90s or so. But baseball and tennis are the twin pillars. I like to rationalize it as such: both involve incredible focus and strategy (hit this tiny ball coming at you at 100mph but you have to hit it in this finite space, now go!), both can be mentally draining, and both to me are incredibly aesthetically pleasing.

Stan set up a Wimbledon suicide pool with some of our friends, most of whom know fuck-all about tennis. A suicide is pool is kind of like filling out a March Madness bracket, except you pick one player to advance for each round, though you cannot use that player again. Which means you have to look at the HUGE DRAW and pick a valid winner for each match-up, until eventually you predict a winner. Pretty fun. I know no one cares, but here are my picks round by round.

1st rd: Lleyton Hewitt (only time I will ever root for him because he’s a fucking dick) & Venus Williams (she should make it to the finals and maybe win it, but you never know with her)
2nd rd: Mikhail Youzhny & Agnieska Radwanska
3rd rd: Stanislas Wawrinka & Lindsay Davenport (I highly predict to be booted out of both the mens and ladies pools right here)
4th rd: Andy Roddick & Jelena Jankovic
quarterfinals: Roger Federer (yes, I think he’ll lose in the semis) & Ana Ivanovic
semifinals: Novak Djokovic & Maria Sharapova
finals: Rafael Nadal & Serena Williams 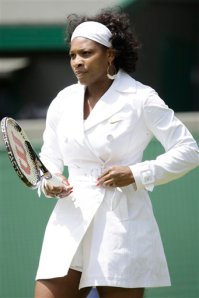 Thankfully, she took off the coat once play started. 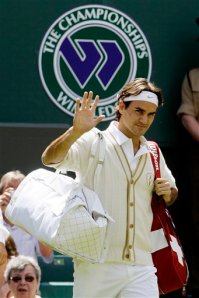 WTF is that cardigan?!?! And your fucking manbag. 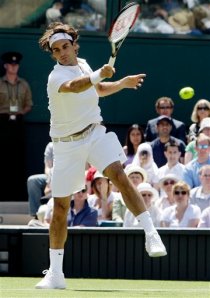 IS THAT A FUCKING WHITE BELT?!?!?!? Ugh. You pretentious douchehole.

blatant faggotry, talking about fashion (like i'm one to talk), tennis |

This isn’t a joke?

OH MY GOD. It’s like “Meet The Mets” getting fucked by Billy Joel on a bed of synthesizers.

I’ve listened to it like a dozen times already, at least. My favorite part is “We’ll go nuts for every curly W.” I kind of like that line, in the “it makes me think of pubes” kind of way.

On the Kinsey scale from Paul Newman to Liberace, I give this a Rufus Wainwright.

Hat tip to Why I Hate DC, and an excellent lyrical parsing is here.

Smear The Queer
Blog at WordPress.com.